Simplicity and a Fate Worse than Death

I found an old Simplicity pattern recently and it brought back all kinds of memories.

My Mama sewed and was an extremely talented seamstress when she put her mind to it. My Grandmother was also very talented and obviously taught my mother how to sew. Mama made some beautiful clothes for herself. She also made drapes for our house as well as some for my dear Aunt Kat's new house. She made throw pillow of every type and description.

During the centennial of the war, she made Daddy an exact replica of the uniform those in Hampton's Legion wore so he would be correctly dressed for his reenactments down to the grey wool, red felt, and gold braiding.

Mama was practical - sometimes to a fault. When I started kindergarten, she made five little dresses for me. They were all from the same simplicity pattern. Each was of a different fabric. One was plaid, two were solid (in different colors), and two were of fabrics of different patterns. Each little dress was a bit unique. One may have one pocket, while another would two pockets, and a third would not have any pockets. But each and everyone one was decorated with a coordinating color of Ric Rac. (I went on to call that year and the next - "Death by Ric Rac".) 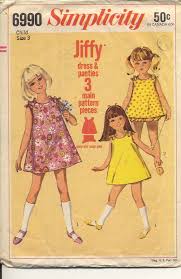 When it got chilly I would be dressed with tights and a blouse under the dresses. If was very cold, she would  put me in a matching pair of corduroy pants under the dress - which even at five I thought was a hideous idea and shared my opinion with her each time that occurred.

In the spring there would be five more in bright spring colors, each with coordinating ric-rac. It never got as bad as having the days of the week labeled on them, but it was damn close.

Mama was being thrifty and looking back on it, it made perfectly good sense. She was very talented. The clothes were well made. The dresses, although fairly plain, were in fashion for the time - whatever fashion was in the early 1960's for a five year old.

Other mothers would ask me if my mother made my dresses. I would answer "yes" with pride. All went well until first grade. For some reason the fashion rules change between kindergarten and first grade, something Mama never quite caught onto.

That fall she made my five dresses. About 4 or 5 weeks into school I went into revolt. My clothes were different from those of my classmates. I wanted store bought clothes just like they had. Mama would have none of that. And so started the clothes war that continued until I left for college.

In high school one year a certain style of top came into vogue. Everyone was wearing them. I had bought 2 or 3. One day I came home from school to find that Mama had decided to make several for me from a pattern she had found.

Yes, her heart was in the right place. However, the fabrics she selected were hideous. The calico prints were something so God awful I feel certain the Mennonite women who shopped locally had passed on those bolts of cloth in the fabric store deeming them too homely. I thanked her for them, tried them on, and put them in my closet. I think she took the hint because that was her last attempt to surprise me with a piece of clothing she had made.

My senior year, I could not find a formal gown for one of our spring dances. In total desperation and came home with the fabric and a Vogue pattern. Mama produced a lovely simple but elegant gown that I enjoyed wearing and actually wore to a dance in college.

Now I had another friend whose mother made all her clothes and they were gorgeous and trendy. Mama had the talent, she just never got the memo that perhaps things would go more swimmingly if I had some input into the fabric and pattern. But generally there was a failure to communicate between my mother and me until I was in my late 30's and had two children.

To keep the peace Daddy decided when I was in high school that perhaps I needed to learn how to sew and bought me my own sewing machine. I took lessons and learned the basics. Several attempts showed me that it takes a great deal of patience and talent to produce a garment from scratch using a pattern, fabric, the necessary notions, and a sewing machine. I gained respect for Mama's talent and the time she dedicated to making my clothes.

However kindergarten was fine for calico, gingham, plaid, and ric rac, but after that peer pressure prevailed. Even as a 6 year old I did not know what "fashion" was. But I knew what wasn't and "Simplicity" was not going to be the end of me.
at August 21, 2021