Send in the Leaves

Where are the Leaves? There ought to be Leaves. Well, maybe next year.

Autumn is the season of crisp weather, bright blue skies, long shadows, and colorful leaves. Last year, I spent much time searching for the bliss of red, yellow, and orange foliage. But, alas, I never found it. Not only was I late (the leaf change was early), the conditions were not ideal. Right then I made a pledge to myself - Never more. I was not going to live this close to the mountains and not experience the wonder of fall foliage (in color).

So this year, I started following the foliage prediction maps early. I was prepared. I had a plan. There would be no disappointment. All predictions said this week would be the peak of the season. As it is, I have the week off (long story why, but I'll spare you the details).

Friday I was in Cashiers (elevation 3500) - no color at all. Saturday, I made my way to the parkway.  Surely there would be spectacular views. At the lower level there was no color. Well, maybe a glimpse of yellow here and there.

I started at the entrance by Asheville and made my way north. As the elevation increased, I spotted a bit of color. However, the traffic was ungodly. Then the mist and fog set in. If there was something to see, it was lost on me. Since there are fewer viewing areas on this part, I had to go 20 something more miles before I could turn around. But, the map said  . . . Dejected I went home.

Sunday, I decided to catch the sunrise on the parkway past Pisgah, elevation 5,700. The 30 degree temps at dawn did not deter me. The sunrise, although a bit brisk, was spectacular. It slowly changed from mauves and purple  . . . 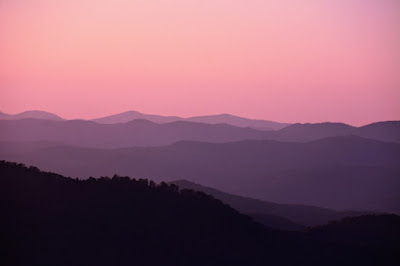 To brilliant oranges and gold. 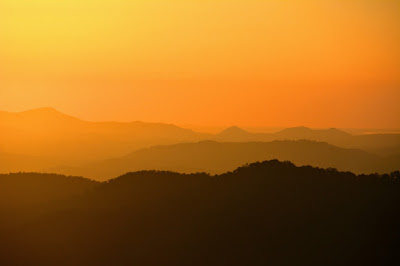 As the sky lightened, I knew the view would change from the golden hues of dawn to a spectacular show of color on the hills. But, alas it was not to be. There was a bit of color amongst the green, but only enough to tease. 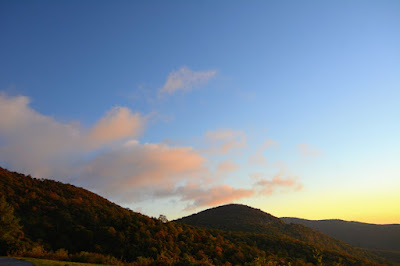 So I returned home and checked the prediction maps. Sure enough they still said that Cashiers and Pisgah were currently at their peak. Actually, according to "those who know", Pisgah was past its peak. All I can say is - who died and made them the experts?
Undeterred, I decided to give it a another day or so. Perhaps one morning I will awake to find that the witch is dead and everything is in color. I doubt it, but a girl can always hope.
at October 19, 2021