What's with the Poo?

I can remember the first time I saw a Labradoodle. She was a rather large black dog with tight curly hair. Then, weeks later, I encountered a Goldendoodle. In my ignorance it looked very much like a golden Labradoodle.

Poodles are extremely smart dogs that initially had their reputations ruined by breeding down to dogs the size of cupcakes (aka Tea Cup Poodles). Unlike their large, regal looking fore-bearers, these tiny things had names like Fifi, Sassy, and Cookie. Oh, the inhumanity.

Originally, these smart German dogs (yes, German not French) were breed to be water retrievers. The name "Poodle" came from "pudel" which means to splash in water. And, there is reason for that odd haircut - a combination of a shaved dog with puffs of hair remaining. This is a traditional cut used by hunters. The dogs swim much better with a sleek cut, but the the hair around their joints and upper torso is kept to protect these parts from the cold. (And, I thought for years that it was a humiliating haircut used to look like the work of a pompous French hair designer.)

Characteristics of the breed are described as Intelligent, Alert, Faithful, Active, Trainable, and Instinctual. Given all the sizes of the dog now (Standard, Medium, Toy, and Teacup) there is only one breed standard - the Standard (as in full size original Poodle). Fun fact: a team of poodles (standard) competed in the Iditerad Sled Race.

But back to the demeaning new practice of cross breeding, what "they" call "Designer Dogs". Like all dog breeds, the poodle descended from a combination of Russian, German, European water dogs, including Spanish, Portuguese, French, German, Hungarian, and Russian water dogs. And, now we have 61 different poodle, poo mixes, in addition to Labradoodle and the Goldedoodle, the more popular are the Shih Poo, Schnoodle, and the Yorkiepoo.

Poodles come in many colors: Black, Blue,Silver,Gray,Cream,White,Brown,Apricot, Cafe Au Lait (seriously?), and Silver Beige. There is also the color "Parti Poodles". Does the insanity ever end? For edification the "Parti Poodle" has a white coat with blotches of brown, red, or gray. Think of a poodle with a coat like a Brittany Spaniel. Then there is a red color that is a result of a separate gene known as the "Rufus" gene.

I was OK with all this until last week when I ran into this lady with this huge (as in small pony size) very hairy dog. The dog was very friendly, wagging its tail, begging for attention. When I inquired about the type of dog, I was a bit taken back. "Oh, this Sweetie, she is a Sheepadoodle (as in Old English Sheep dog and a Poodle)." I commented that she was pretty and sweet.

As she and Sweetie walked away, only one thing came to my mind, "We have now jumped the shark or, rather, jumped the poodle". 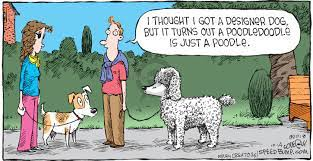